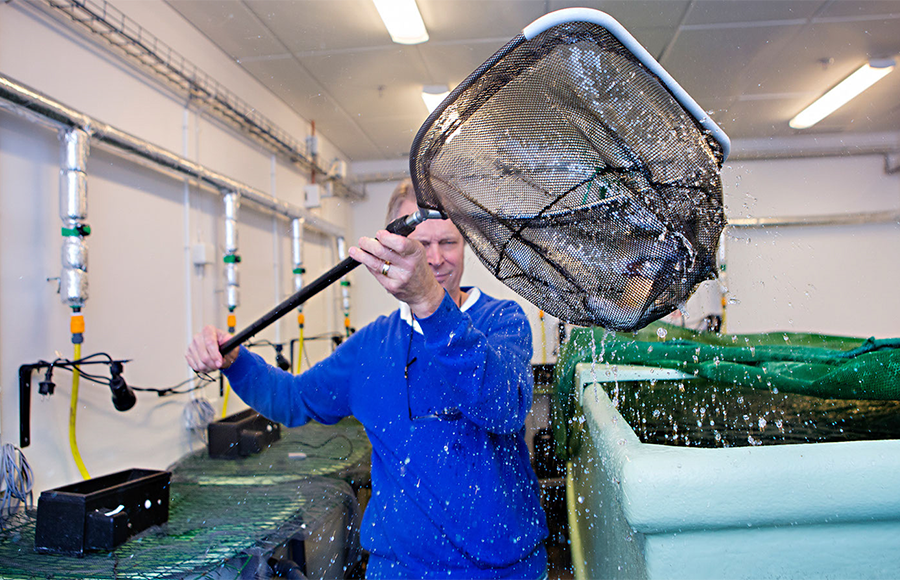 Entrepreneurship in aquaculture – no fishy business

As a researcher, Anders Kiessling, Professor of Aquaculture at the Swedish University of Agricultural Sciences (SLU), wishes to be influential and to contribute solutions to the challenges we are facing. Getting sustainable food production going in a cycle whereby unresolved problems are not passed on to the next generation is at the top of his list.

Together with resourceful entrepreneurs he is already up and running farming fish in a closed cycle – a task in which SLU Holding is participating, so as to facilitate the company's first pilot plant.

His interest in aquaculture has taken SLU researcher Anders Kiessling round the world many times over. He has worked in Canada, Vietnam, Norway and many other countries, often together with researchers sharing the same interest. He says that fish becoming his research focus was a mere coincidence, but his interest having been aroused, he finds fish incredibly fascinating creatures. It was early on in his own research that he became interested in the application of research – an interest that has in particular developed at the foreign universities he has worked at, as well as at SLU, where it is an important pursuit.

The challenge and the focus of his work and research is finding solutions whereby food can be produced in closed-cycle systems and low-value nutrients can be utilised and returned to the system.

The emphasis being on fish, the main issue is in Anders’ opinion feed. Together with energetic entrepreneurs and with the support of SLU Holding, work is in progress on the start-up of a pilot plant for trialling a completely new fish-farming technology. The project involves a type of fish that is little known in Sweden, as well as a new feed. All in a closed cycle. The aim is to offer delicious fish for restaurants and large-scale catering. The new fish-farming technology has been dubbed Bio-RAS. This pleasant-tasting fish is called tilapia, and it is well known in many parts of the world. The fish live in their own ecosystem that is highly reminiscent of a lake environment, including microbes, small crustaceans, microalgae and bacteria. And like bivalves, they are able to filter nutrients.

"It is our hope that we will be able to show that it is possible to produce environmentally friendly products, and that one can do so in a smart way in a closed cycle. We hope and believe that this kind of fish farming can be something that future farmers will be able to practise as an adjunct on their farms. As a five-year project starting now, I think it's perfectly feasible – and the technology has great international potential,” says Anders. 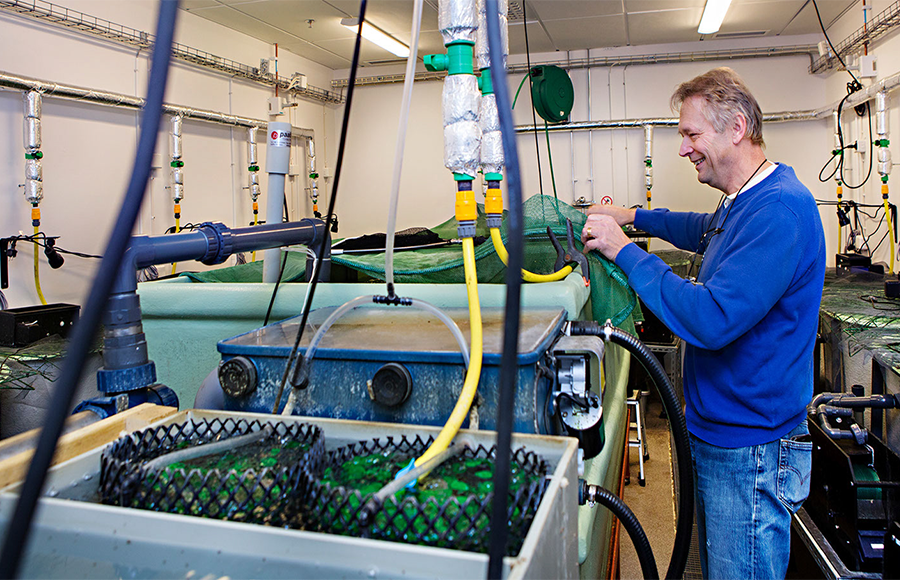 From research to reality

Although Anders describes himself as an entrepreneur at heart, he has chosen to collaborate with an energetic young entrepreneur in order to take his research further.

"I’m curious, and it’s stimulating to see how the innovation work is done, taking research from desk to reality. I’m trained to justify my decisions, and see myself as a co-driver of this work. Neither do I think scientists are the best entrepreneurs. I wish to continue as a researcher and fully retain my contact with the world of research.”

For Mattias Djurstedt, entrepreneur and CEO of Nära och Naturlig, the collaboration with Anders is stimulating and instructive. He thinks their shared entrepreneurial spirit makes collaboration especially easy.

"I'm really proud of the collaboration with Anders. He’s a good advisor, and for me it’s a great privilege to work together and learn from experts within our society. Anders' knowledge and my drive make us a good team. Together we’re taking the project further. My hope is that we will establish a completely new sustainable fish-farming technology that is better environmentally, improves fish health and provides a tastier fish whilst at the same time reducing feed production – and is also more economical," says Mattias Djurstedt.

SLU Holding is a valuable catalyst

Collaboration with SLU Holding is also important to Anders, and he describes it as a support system whereby you can try out ideas and get things started. A little like a catalyst who understands his role as a researcher and can provide advice and help in order to take the idea further.

"Contact with SLU Holding is straightforward, and I feel that there’s knowledge of and understanding for me as a researcher and my interests. And receiving financial help to get started and try out our ideas in a pilot plant enables me to realise my ambition and my interest in taking research further and doing good," says Anders Kiessling, Professor of Aquaculture at SLU.

Learn more about Nära och Naturlig (only in swedish).
Read more about Anders Kiessling and his exciting research.