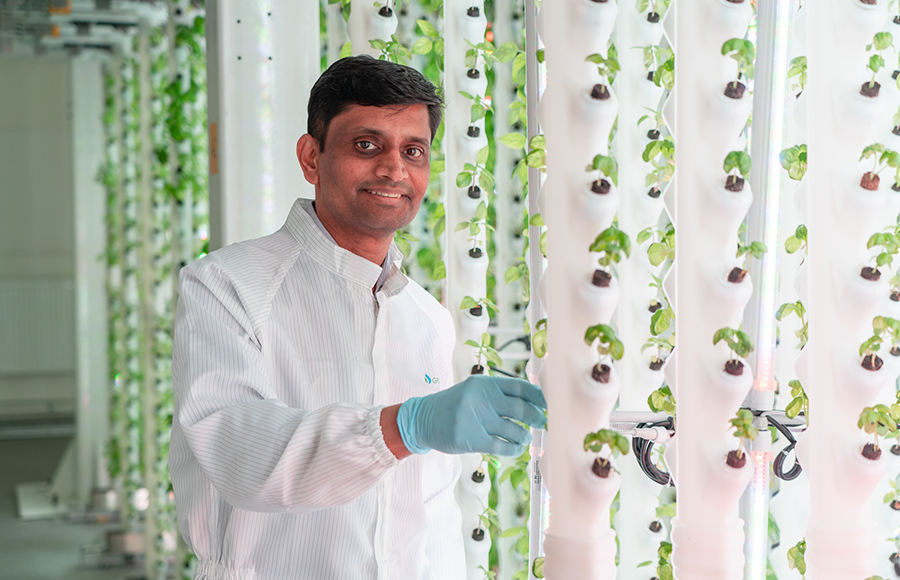 Sarosh Ramachandra Bejai has carried out research at the Swedish University of Agricultural Sciences (SLU), and is the entrepreneur behind the company Eko Grönovation, which fills parts of Kungsängens Gård in Uppsala with fragrant herbs and medicinal plants in a proprietary hydroponic farming facility.

Sarosh still collaborates with his colleagues at SLU. In part of the facility, joint development work is in progress, with an emphasis on bioactive components that can in the long term be developed as possible new drug candidates.

Much has happened since the start of Eko Grönovation in 2017. The pandemic has slowed down the development work, but has also given Sarosh Ramachandra Bejai and his team the chance to further hone this farming technology. The technology is now in place, and the farming system at the facility at Kungsängens Gård is fully operational. During the spring the company was also included on the 100 List of the Royal Swedish Academy of Engineering Sciences (IVA), which promotes research projects with the potential to create social benefit.

"It's always nice to receive recognition, and it feels good that we’re now up and running, and are growing plants in our first proper facility. As well as herbs, we’ve also started growing medicinal plants. The technology’s the same. Our cultivation system, which is fully automatic, has been developed and redesigned, and the important control and monitoring systems have been adjusted and developed, and are now controlled using an app," says Sarosh.

Collaboration with SLU researchers in the facility's new lab

New opportunities have also opened up. In the new farming facility a lab has been installed where Sarosh, together with colleagues from SLU’s Department of Plant Biology, is working on the isolation of new molecules from the medicinal plants undergoing cultivation – molecules that could in the long term serve as new drug candidates for the pharmaceutical industry going forward. Areas such as cosmetics and dietary supplements may also be relevant.

"The plant kingdom has great potential as a source for development of new drugs, so this is very exciting. We’ve built a fully equipped lab that with an area of 100 square metres takes up half of the facility. The challenge for us now is to use fingerprinting technology in an attempt to identify and isolate interesting molecules for future development in collaboration with pharma companies. In the lab we’re also carrying out research to see how we can further improve the various parts of our proprietary hydroponic farming technology,” says Sarosh.

The fact that the tasty, healthy and locally grown vegetables are appreciated shows that we have a growing clientele. Local supermarkets and vegetable wholesalers are part of the customer base, as well as a restaurant chain for which Eko Grönovation is developing and growing Asian herbs for the various restaurants’ kitchens. 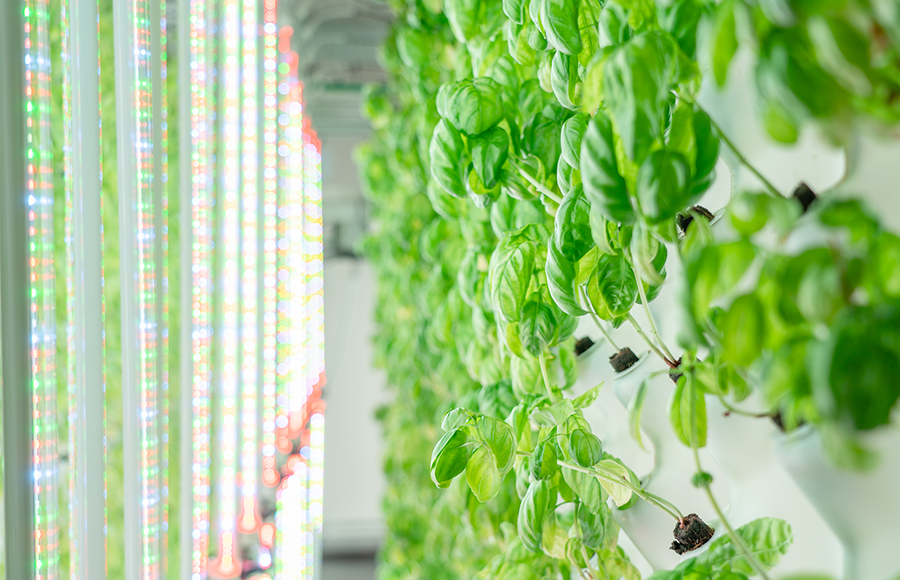 The collaboration and contact with SLU Holding, which was the first to invest in the company, is important to Sarosh and his team.

"SLU Holding's investment enabled us to take our ideas further and develop the business. The collaboration has continued and expanded. With the aid of SLU Holding we’ve established contact with various networks, and have been given the chance to present our business in different contexts. This has led to new business opportunities, and has been very beneficial going forward – achievements it is not so easy for a researcher to create single-handedly.”

The challenge ahead, Sarosh says, is to develop and build larger facilities in order to increase the capacity to produce flavoursome and healthy herbs and find interesting medicinal plants with potential in the cosmetics and pharmaceutical industries, or as beneficial raw materials in nutritious new dietary supplements.

"I’m so proud of my team and the work we’re doing together, and look forward to continued positive cooperation with the researchers at the Swedish University of Agricultural Sciences (SLU) and SLU Holding," says Sarosh Ramachandra Bejai, Eko Grönovation AB’s CEO.

Learn more about Grönovation and their technology