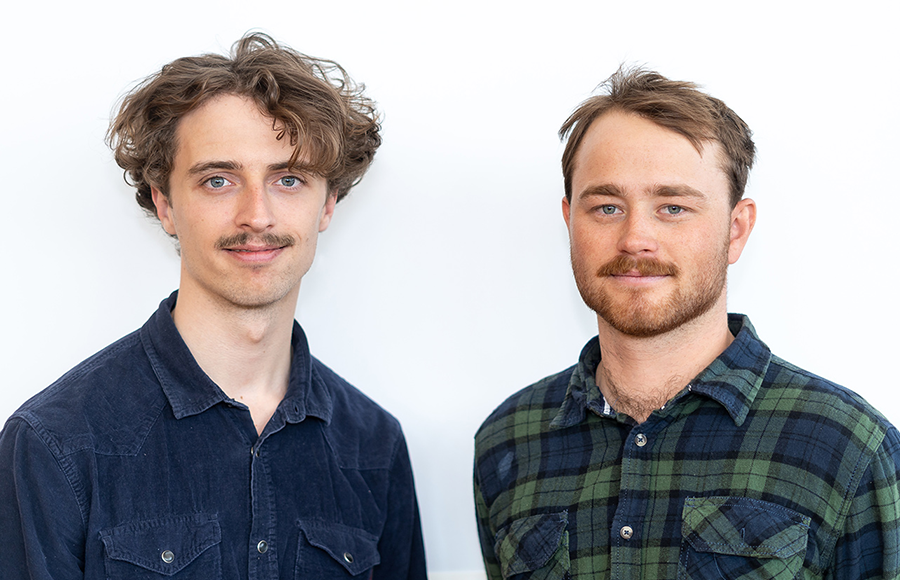 Axel Ljudén and Albin Nyström are studying to become certified foresters and are this year’s winners in Venture Cup Nord’s regional finals. In the autumn, the award-winning business concept will continue to compete in the autumn national finals, but the beta version of their new app has already undergone beta testing this summer with the help of validation funds from SLU Holding.

Inspiration from the forests of Värmland
For Axel, it is his experiences in the Värmland forests with his grandfather, a biology teacher, that account for his inspiration both in terms of career choice and his goal and vision of helping to get more people out into the forests rich in berries and mushrooms. For Axel, a map is a natural tool and a key to finding special places and experiencing the variety that nature offers.

“I also have a major interest in technology and a passion for photography, and have been increasingly using maps to find and access locations where the chances are greater of encountering the wildlife I want to photograph,” says Axel. “This is also a part of the idea behind our berry and mushroom app – to use smart technology to make it easier for those who want to pick berries and mushrooms to look in the right place. An approach that Albin and I, both of us dedicated berry and mushroom gatherers, took a step further and developed into a business concept.”

Look in the right places
The impetus in their work is to interest and attract more people in getting out into the forest and countryside. With the substantial interest these days in picking berries and mushrooms, their hope is that more people will want to get out into the forest if there is a simple tool that takes them to places where the chances are greater of finding mushrooms or berries.

The app goes under the working name Plocka (Swedish for “pick”) and is a complete solution that both makes it safer to go out into the forest and easier to find mushrooms and berries by looking in the right places.

“By combining different data sources about the forest in a smart way with relevant data for the season, you will be able to get suggestions for possible places,” says Albin. “It will also be possible to search for different kinds of mushrooms and berries and get suggestions for places where they grow. The app will also have certain other simpler features such as navigation help when it’s time to head home.”

Validation and testing
The goal is for the app to be used throughout the country. Testing of the beta version has been carried out this summer. After the test period the focus is shifting to making improvements and correcting any errors that have surfaced during testing.

“Getting support in development means a lot,” says Albin. "The validation support we receive from SLU Holding has enabled us to develop a prototype for beta testing this summer and to ensure that the platform is stable and works as intended.”

It also enables Albin and Axel, owners and founders, to enlist the help of IT consultants with coding and building the technology in the app. This is crucial to the goal of launching the app as early as the end of September.

Use your university time
Axel’s advice is to be attentive to the ideas and thoughts that come up during your study years and to try to take these ideas further.

“Many good ideas are born during your time at university, but all too many are not followed up and are soon forgotten. I want to encourage more people to take the next step. Your university time is a good time for developing your smart ideas. There is plenty of support and funds are available, so I would really recommend everyone taking the opportunity if you feel that you have time for both studies and developing your ideas.”

More ideas to develop
For Axel, this is just the first idea in what he hopes will be more solutions that make it easier for more people to get out into the forest and countryside and take advantage of what it has to offer. Smart technology enables many good solutions. Both when you are already out and when it comes to help in planning to get there. By the end of September, Axel and Albin’s first app will be ready and available for download for those who want to get out where the berries and mushrooms grow.

Watch Albin Nyström pitch their award-winning idea that took them to victory in the Venture Cup Nord's regional finals (in swedish).

Want to know more about Plocka? Go to their website.

If you wish to discuss an idea or research project within the green industries, please contact one of SLU Holding’s business and innovation advisors.