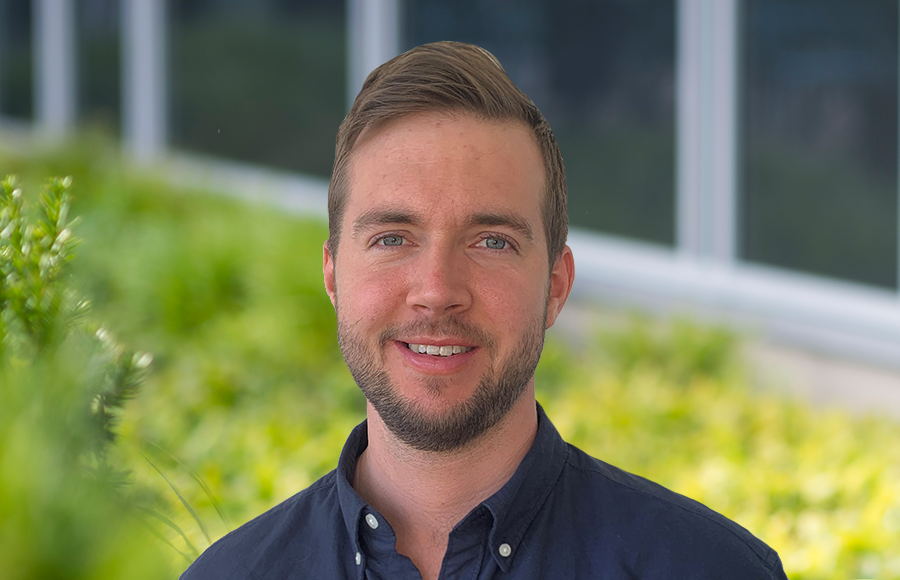 Victor Håkansson is an agricultural technologist from SLU Alnarp and founder of the IT start-up company Green Adviser – which has developed a digital remote tool for agricultural advisers. The business idea was born, took off and grew during his years at university. The service is now being launched and Victor is back in Alnarp, sharing in operation of VentureLab@SLU at SLU Holding.

Victor Håkansson has entrepreneurship in his blood. He was born and raised on a farm in Lundsbrunn in Västergötland with extensive cultivation with several kinds of crops, breeding of pigs, forest production and energy production from wind turbines.

Entrepreneurship – a way to steer one's career
“With my whole family, neighbours and friends being entrepreneurs, it was natural that I'd be an entrepreneur too,” says Victor Håkansson, founder of Green Advisor. “I want to work in the agricultural sector. There is tremendous potential here. Running your own business is an inspiration and a driving force, and for me personally it is also an opportunity to steer my future career.”

The idea for the service that Victor and his team at Green Adviser are now establishing in the market came about while studying in Alnarp, where he received both advice on how to move forward and coaching from the business advisors at SLU Holding.

Challenge – test the idea on your prospective customers
“I received support and help along the way in taking my idea further towards a finished service, and was challenged at an early stage to contact the intended target group. Testing the product early on has helped me a lot, and with validation resources from SLU Holding, we have been able to take the idea further. We now have a service to offer and negotiations are underway with interested buyers.”

In order to understand the IT world better, Victor has also studied information architecture at Malmö University in parallel with the master's programme.

“Yes, that's right. I want to know more so that I can advance my ideas; expertise in the IT field paired with extensive testing activities can show the way forward. It has helped us to work customer-focused and is a key to successfully taking ideas further. Without extensive testing, there is a risk of developing something no one wants.”

"You could say that our service is similar to the apps that are available today for digital medical appointments and advice such as KRY, My Doctor and others. Our service saves money and time for both advisors and farmers. Advisers are given the opportunity to directly help their customers through the digital service, and for farmers manyof questions and problems can be answered or solved directly without having to wait for visits to the farm", Victor explains

“Receiving coaching is quite valuable for a company in the start-up phase. There are presently three of us in the company and for a period, we have received tailored business coaching through the incubator along with new valuable knowledge through workshops, seminars on sales and marketing and much more.”

Incubators and business coaches complement the academy
Victor feels that the partners who interact with universities and can inspire and contribute with coaching and knowledge are essential for making research useful and implementing innovations in society.

“The academy is working with a research focus. The mindset is academic and there is a clear framework. My education has not at any time been about entrepreneurship or the mindset that often drive an entrepreneur. This knowledge is also needed to take ideas further and this is something that incubators and business coaches in university holding companies can contribute with. Today, 9 out of 10 start-ups fail. With more coaching and the right support, that can change.”

For it is during one's studies that Victor believes that many new ideas and visions are born that can be developed and eventually contribute to important innovations, with the ideas actually being implemented and benefiting society.

Build innovations during university years
“Yes, the years at university are good years,” says Victor Håkansson, founder Of Green Adviser. “As a student you have ideas and visions for the future, you have your CSN grant and access to the business coaches and support systems that incubators offer. In addition, there is the opportunity for personal coaching and other assistance, which can contribute to and support development activities. SLU Holding and minc in Malmö are two good examples of organisations that have helped us.”

One of those who can help is Victor, who is working part-time as a student coach at SLU Holding in Alnarp.

Contact Victor now!
“Yes, do get in touch. Quite quickly, you'll see that the obstacles to moving forward are not as big as you think. You'll also learn a lot, so if you're interested – get in touch,” says Victor who promises to share what he appreciated most and that which he sees as essential for those who want to see real progress – a coaching approach.