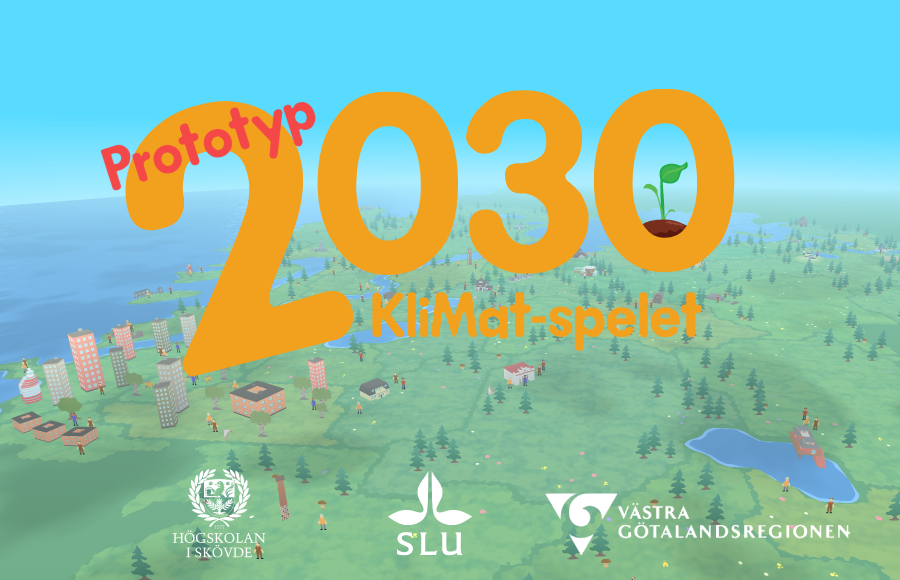 Within Prototype 2030, researchers from SLU and the University of Skövde collaborate with SLU Holding to take a common approach to current issues related to food, the environment and climate.

Gamification is a way to make complex research-based knowledge accessible via games. Prototype 2030 is currently available in a regional version for Västra Götaland County and the plan is to develop the game further into a final version, the 2030 KliMat Game.

The game prototype is digital and is aimed at those who work with or are interested in sustainable development. The primary target group is upper secondary school pupils. The prototype has been tested during the autumn of 2019 within subjects such as general science, biology and geography in order to evaluate how the prototype can be developed into a final game.

- The already developed game, combined with related teaching, will raise awareness among pupils about the challenges society is facing, different goals, goal conflicts and strategies to meet them. We also want the future game to contribute towards an increase in motivation and a desire to be more engaged, both within young people and consumers. With young people, this means their career choices, their roles as consumers and future role as decision makers, says Mats Wiktorsson, innovation advisor at SLU Holding in Skara.

The University of Skövde is the largest education node for computer game training in Sweden. Interaction Lab is based here and conducts research into game development, the social benefits of games, representation and gender equality in games, as well as game-based learning.

- Games can be used to inspire knowledge and change behaviour. Young people play a lot of computer games and the climate is the future issue that young people are most worried about. The game prototype combines these interests and it is our hope that it will be well received, so that we can take the next step and release a final game, says Björn Berg Marklund, game researcher at the University of Skövde.

Christina Lundström, AgrLic RådNu from SLU is working on issues related to learning, communication and advice as well as digitalisation, and new technology in agriculture is one of the driving forces behind the project.

- Serious gaming has been applied in several areas such as education and health care. Questions about food and climate are complex and we want to demonstrate that with the game, says Christina Lundström, AgrLic RådNu, SLU.

The ambition is to produce the game in two versions, a regional version and a national version for the whole country. In the work on the final version, RISE will join the project as an additional partner. A scientific council will also be involved the development of the game, with researchers from SLU, HS and Karlstad University. The final game is expected to take several years to develop and is expected to be completed in 2022.