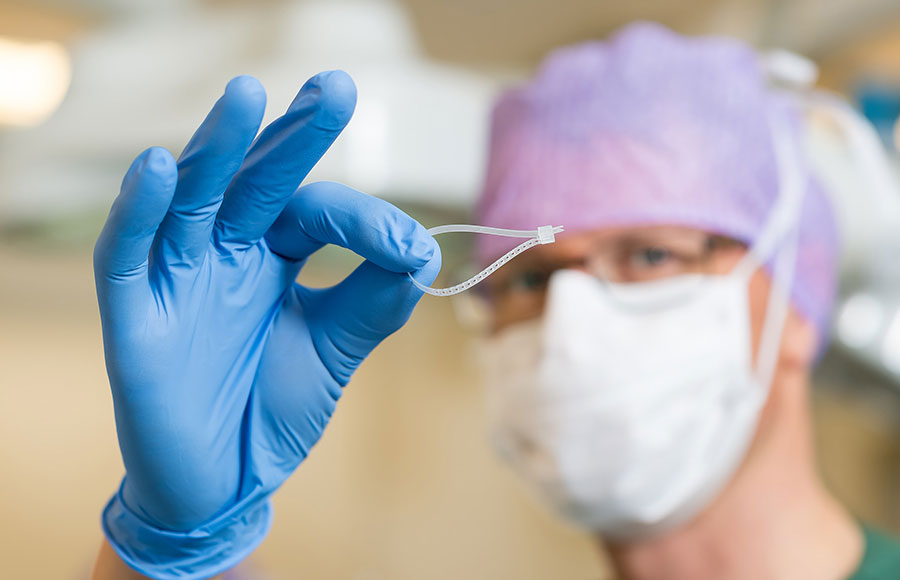 It was during his doctoral studies at SLU in the field of surgery that Odd Höglund carried out the early development and initial tests of the absorbable implant in the form of a self-locking loop.

The concept for LigaTie® was born and the foundation laid for the company Resorbable Devices. As early as in his first week as a researcher, Odd contacted SLU Holding for advice on patent issues.

Odd Höglund graduated from SLU with a degree in veterinary medicine in 1995. Following graduation, he worked clinically in the private sector with small animals and pets before he found his way back to academia to commence doctoral studies in the subject of surgery in 2007.

Half of his dissertation concerned the early development and initial tests of LigaTie®, an implant in the form of a self-locking loop. The material is resorbable, i.e., in the course of time it dissolves by itself and is resorbed by the tissue.

“I got the idea for this project as I started my doctoral project, and my principal supervisor, Professor Anne-Sofie Lagerstedt, was brave enough to approve this sub-project,” explains Odd.

A unique application of resorbable material
What was unique about the research results for LigaTie® was the application. In certain situations, a self-locking loop can simplify the surgical intervention. Nothing similar made from resorbable material had been developed previously. It is hoped that the method will lead to reduced traumatisation of tissue during an operation and, consequently, less pain for the patient following an intervention.

All development work in surgery endeavours to enable a simplified, fast and safe surgical procedure with reduced risk of complications and shortened recovery time. This is the mission of Resorbable Devices AB and the resorbable implants.

The research domain of resorbable polymers is an area in which Odd collaborates with researchers from both Uppsala University and KTH Royal Institute of Technology in Stockholm. Odd also collaborates with the medical device industry in both Uppsala and the USA. The products currently under development are intended for use in thoracic surgery and urology and, at a later stage, human medicine as well as for the initial veterinary medicine.

The value of SLU Holding as a source of additional competence

Odd made prompt contact with SLU, in fact as early as within his first week as a doctoral candidate, in order to find out more on how patents work. In order to protect an innovation, a patent application needs to be made before or at the same time that the researcher, in some manner, publishes their research.

“We visited a number of patent agencies together and discussed how a patent application should be formulated – it was very interesting and instructive. At present, we hold several patents related to this research project,” Odd explains.

SLU Holding saw potential in Resorbable Devices early on and chose to invest in the company in December 2017.

“The business concept and product LigaTie, the team’s expertise and determination assured us of the company’s future potential. Resorbable Devices AB exhibits all the signs of a successful company, so SLU Holding decided to invest,” says Urban Eriksson, CEO of SLU Holding.

The due diligence process a company must go through when seeking financing is valuable.

“The scrutiny the company is subject to in the event of an investment, in this case by SLU Holding, is very useful. As an entrepreneur, you must know where you would like to go and be able to justify why the company should take that step,” Odd concludes.