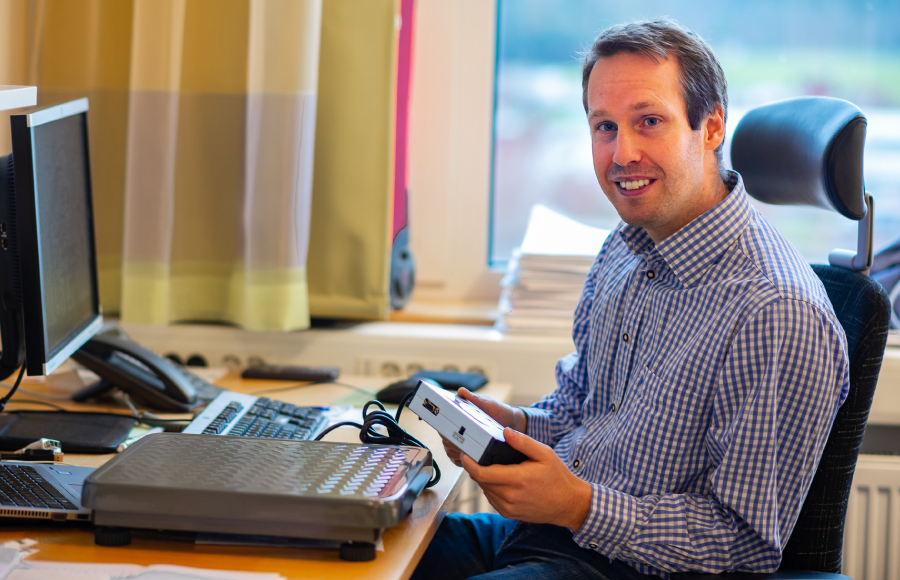 There is no doubt that this is a large and complex area. Grocery stores tend to have food waste of 1 per cent. Commercial kitchens’ are on a different level altogether. As much as 10 - 30 per cent of food which is prepared is not eaten. The fact that food waste is a large and important problem does not deter Matthias. On the contrary. The difficulties and problems inspire him.

We need to agree that it is a problem
Matthias has been conducting research in the subject for a long time. Despite this, he feels less knowledgeable now than when he began eight years ago, when he felt that it probably would not be so difficult to convince people to stop throwing food away.

“Though we have a long way to go, a lot has happened since 2010 when I began my research at SLU. Back then it was primarily a matter of waste management, whilst focus has now shifted more to selling and giving away excess food. When I began working with food waste, I thought that it would be a fad and predicted that interest would peak around 2012 and then taper off. But I was wrong. The opposite happened. Interest in food waste just keeps on growing. Perhaps because it’s a complex problem which is difficult to solve and which is closely linked to the problem of our overconsumption,” says Matthias.

Part of the problem is that many people do not see their own food waste as a problem – no-one says that they are throwing away food. If we were able to see our own responsibility for food waste instead, Matthias feels that the willingness to seek solutions would be greater.

“No-one really wants to have food waste, but in the long term, our consumption-based lifestyle results in waste when food that is not used is thrown away because we have too much. As consumers today, we can essentially buy whatever food we like, around the clock. Store shelves are well-stocked and the range of products is large. Food is cheap and we can buy a little extra to have at home. This has consequences in the form of food waste.

The drive is to solve food waste
Matthias is part of a number of research projects focusing on how various measures can reduce food waste. Among other things, he works in an EU project which aims to create strategies for more effective waste management in touristic cities where the focus is on reducing tourist hotels’ food waste. Another project currently under way is about finding and evaluating measures which reduce food waste in commercial kitchens and restaurants. For Matthias, it is important that the research will come to use.

“It’s ultimately about solving the food waste problem and thereby helping to save the planet. As researchers, we cannot simply sit and idly pick at our own research. We need to find channels to society in order for new knowledge to be made available and put to good use. The problem is that sometimes we have neither the time nor the competence to make the research available. We write scientific publications in English in international journals. But we don’t reach decision-makers or Swedish readers this way. We need help making complex messages available to a wider audience.”

Measuring instrument - the first step in acting
Matthias works primarily with measurements of food waste and analysing environmental impact from waste-reduced activities. With this knowledge as a base and the awareness of commercial kitchens’ high level of food waste, there was little deliberation when he was asked to help with an instrument which would facilitate simpler measurement and analysis of the food waste in a school kitchen.

“Food waste in commercial kitchens is a problem that we have not come quite as close to solving. We often point to stores’ high level of food waste. But the problem is on a different level altogether in commercial kitchens. The food procedure today is long-winded and it takes a long time before the staff receive feedback.

Together with some of his technically-minded friends, Matthias began building a prototype for an instrument which can more quickly return measurement data for feedback which can be reacted to. At the same time, the idea to start a company, Matomatic AB, was born, in order to reach a wider audience with the service.

“The solution that we developed consists of a weighing scale connected to a computer. Food is weighed on the way to the bin and all foodstuffs that are thrown away are weighed individually. The information is then sent to a website for direct feedback. Fast feedback makes it possible to see where the problem is and to see patterns for different days and seasons and which mealtimes are more problematic."

Effective tool in the fight to reduce food waste
With more information, food waste can be presented more clearly and measures implemented where necessary. What Matthias and Matomatic AB can offer is a solution which makes it easier to simply buy and prepare the same amount of food that is actually used. The major challenge is giving commercial kitchens the incentive to use the measuring tool.

“It’s all about changing routines. It requires leadership and a willingness to solve the food waste problem. In the schools, it’s normal to create routines so that the pupils don’t take more food than they eat. For pedagogical reasons, it’s important to involve the pupils in contributing to reduced food waste, but they are not the big problem. The problem is that the amount of food purchased is significantly greater than what is actually used. Using Matomatic AB’s measuring instrument, it is possible to gain a better overview of how much food needs to be prepared and thereby significantly reduce food waste and purchase costs for foodstuffs."

With an investment from SLU Holding, financing from Vinnova’s investment in Innovative startups and their own invested funds, Matomatic has continued to develop its measuring tool.

“Although food waste is not a technical problem which can nevertheless be partly solved using technical aids, much work remains in order to reduce food waste. When politicians and managers choose to address the issue, we can offer a good solution.”

For the company, it is now also a matter of transitioning to working more with sales.

Going from development to sales

“We’re now making a transition from development to sales and need help from the right people. The collaboration with SLU Holding is important and will hopefully provide us with knowledge and legitimacy. We hope that more commercial kitchens and restaurants will want to invest to reduce their food waste, but also that more researchers will want to use the tool to facilitate data collection in food waste measurements."

One important source of support in the continued work is the innovation system surrounding Uppsala´s universities.

“We are on Uppsala Innovation Centre’s (UIC’s) business development programme, which gives us good opportunities to develop our business model. It means a lot to us.”

For Matthias, who is both a researcher and partner in Matomatic, the situation is somewhat complicated as he has difficulties using the company’s products in the research without finding himself in a conflict of interest situation.

“I mostly want to research, but also to work with the measuring tool in my own research and take part in the company’s development in order to offer a valuable measuring tool to more people working with food waste.” Despite the problems surrounding this, he does not hesitate to recommend other researchers to actively work to get their research out into society."

“It is not enough simply to research in order for the findings to be beneficial to society and companies. Our knowledge is valuable, but in order to be understood and available to society, it needs to be packaged in a useful manner. The way there is not always simple. Being involved as a partner in a company can be complicated. But important. We all have a responsibility to take part and contribute if we are to save the world."

Read more about Matthias Eriksson and his research here.