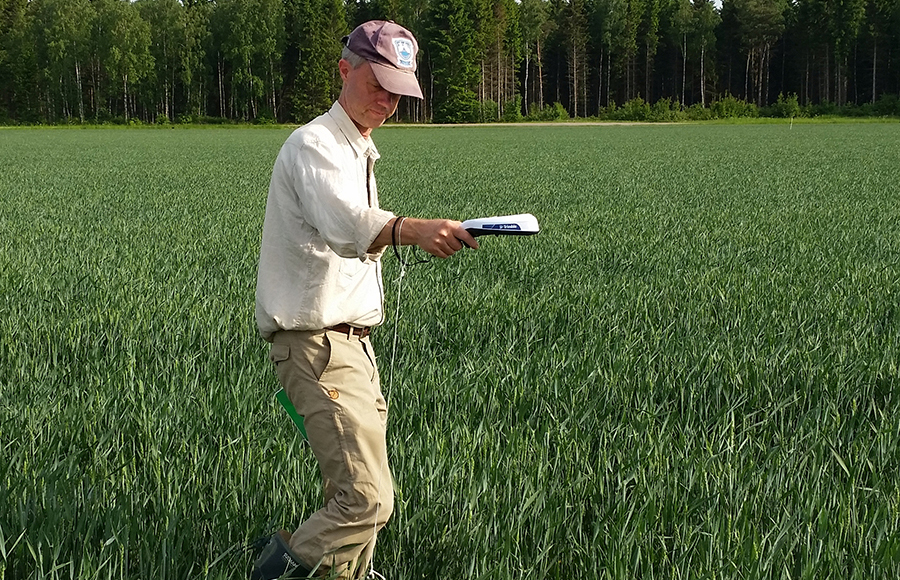 Mats Söderström, associate professor at the Department for Land and Environment at SLU in Skara, is the researcher behind CropSAT®. A digital service for precision cultivation that provides conditions for better harvests and less environmental impact. We interviewed Mats about his innovation journey on a sunny day in Skara.

CropSAT® is a digital precision cultivation service where satellite data from different cultivation fields is made available on a website; this to provide decision support primarily for fertilization of autumn wheat, which after spring barley, is the largest corn crop in Sweden. On the website, farmers can download images of their fields to their tractors' computer equipment. Using GPS and the technology in the tractor, the tractor's manure spreaders are automatically controlled so that every part of the field gets just as much nitrogen as needed.

The goal is to attain a high degree of nitrogen utilisation in order to avoid the nitrogen that is not absorbed by the plants from escaping into the environment. In this way, the environment is spared and the conditions are provided for good, uniform yield.

Technology development provided the right conditions
Mats is from western Sweden and is basically a geoscientist. He was early in working with GIS, geographic information systems, which somewhat simplified can be described as digital mapping systems. Through various projects at the beginning of the 90s, Mats was involved in the development of precision cultivation where the use of satellite data was a natural aspect.

– Satellite data has been used in various research projects for several decades, so it was really nothing new,” Mats explains. “In the beginning, however, it took a long time from the satellites passing, which they did quite seldom, before you could access the images – and every single image was very expensive.

But through certain important political decisions in the US about lifting restrictions on the accuracy of the GPS system in the early 2000s, and also due to several new satellites, development moved briskly forward. More detailed images could soon be produced in a more cost-effective manner, which changed the conditions for applying satellite data in practice.

Collaboration crucial
By 2012, the time was ripe for creating and testing a new type of advisory method for farmers. Many farmers were already accustomed to using GPS and automatic dispersal technology for manure spreaders on their tractors. Together with Lantmännen, the Rural Economy and Agricultural Societies and Agroväst, Mats and SLU created a new exciting project. The aim was to develop a digital system for providing advice on variations of nitrogen supplements for autumn wheat. After considerable manual work with creating mapping systems and entering data, Mats and his group concluded that the quality of the satellite data was good, and that the data flow from satellite to users worked quite well. Among the challenges faced were managing images with clouds, attaining relevant images and presenting the information in a simple and easy-to-understand way. The latter was resolved in collaboration with the company DataVäxt AB, which has taken over operation of CropSAT® and added new functions.

– The CropSAT® project showed that a digital advisory system could be set up that farmers found useful,” says Mats. “We also realized that the satellite images of the fields worked well as sources of advice even if they were not entirely current. The images could be up to a few weeks old and still be useful. Further research has shown that CropSAT® can be used with several crops and there is major potential for using the system to transfer research results for practical application.

Innovation and driving force
Mats soon realised that CropSAT® could be an innovation once the system first underwent live testing.

– “It was great to see that the system quickly attracted users and that it has become a natural element of advisory services; it feels very uplifting,” says Mats.
Mats has always been driven by a desire to improve society through new knowledge and technology, and this system can make it easier for many farmers to improve their cultivation and to benefit the environment. These kinds of decision support systems are becoming increasingly common in the digital world. CropSAT® has distinguished itself by being free of charge for users and very easy to use. During 2018, CropSAT® has had more than 10,000 users in Scandinavia, and the system is spreading to the rest of Europe.

– SLU Holding helped us realise what was required when CropSAT® was to be transferred to a business,” says Mats. “They helped us get an agreement, which was invaluable. I never would have managed this on my own. We even received solid support in arranging meetings with the parties involved and in contacts with SLU's lawyers.

Mats’ tips for others who want to apply their research in the public sphere
1. If possible, carefully consider the project application and try to understand how the research results can be used once the project is finished.
2. Involve SLU Holding as early as at the planning stage to obtain their views on how the results can be utilised.
3. It is also good to allocate funds to enable work with how the results can be applied. It strengthens the application if funding is also sought for applying the research results in practice.
Speaking of realisation, Mats and his department have now begun their next project, the Laboratory for Intelligent Decision Support Systems (LADS). A project supported by, among others, the Västra Götaland Region, SLU and DataVäxt. New doctoral students have been recruited for the project to conduct research in the field.

“So now it's full speed ahead!” concludes a cheerful Mats Söderström.