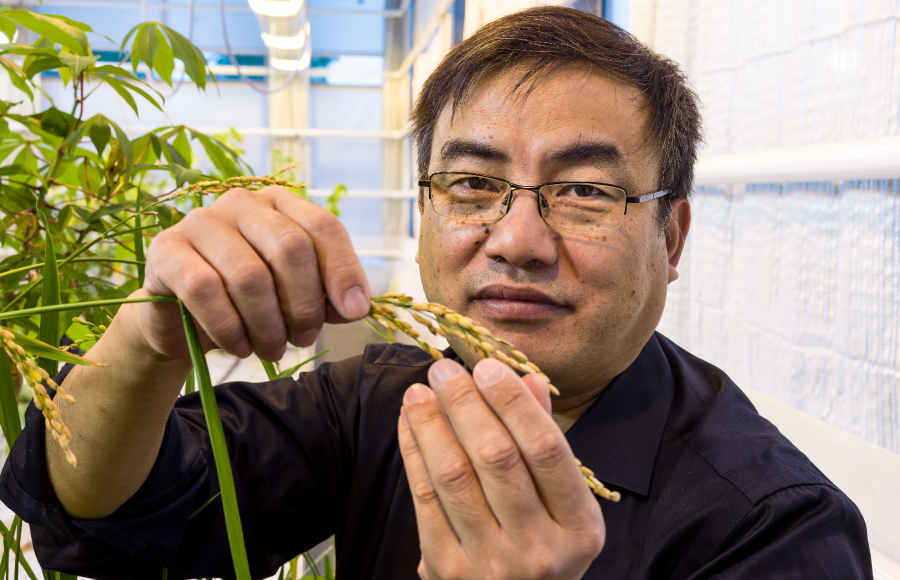 A new, more climate-friendly rice produces higher yields while lowering greenhouse gas emissions from rice paddies. The rice can also thrive in a warmer climate. Associate professor Chuanxin Sun and his research team at SLU are behind the award-winning research that led to this climate rice.

“If this rice were to be grown globally, it could potentially mean food for 200 million more people, while reducing the carbon footprint by a corresponding 120 million cars,” Sun explains.

Chuanxin Sun's research career started with a master's degree and a couple of years as a researcher at the Chinese Academy of Agricultural Sciences in Beijing. At the end of the eighties, Sweden caught Sun’s attention as an interesting research country, not the least in biology, and in 1988, he transferred to Stockholm University for his PhD. The high level of research in Sweden whet his appetite; Sun stayed and 10 years later he moved to SLU in Uppsala. Nowadays he is a senior lecturer at the Department of Plant Biology, where he leads a five-person research team. Sun also coordinates an international research project on climate-smart rice species with researchers in Sweden, the US and China.

An award-winning rice with genes from barley
Rice is the staple for a large portion of the world's population. However, the water-filled rice paddies emit large amounts of methane from the roots of the rice when bacteria consume the carbon that accumulates in the root system. These emissions account for up to 17% of the world's total methane emissions, a highly potent greenhouse gas, the second most significant greenhouse gas after carbon dioxide. The rice produced by Sun and the SLU researchers produces 90% less methane than other common rice variants, and at the same time produces 10% higher yield. What Sun and his team have done is to transfer a gene from barley to rice, a regulatory gene that controls sugar synthesis and distribution of the sugar, or the carbon, in the plant. With this gene, more photosynthesis-generated sugar is sent to the stalks and rice kernels, and less to the roots.

- “Our research in carbon flows within the plant, i.e. how to change the metabolic flows, also allows the plant to have other properties,” Sun explains. “We want to distribute the carbon so that more ends up above ground, i.e. in the stalks and kernels. When the carbon goes down to the roots and to the bacteria there, methane is formed. We now starve the bacteria so that less methane is formed at the same time as the carbon flow is regulated to, for example, create more starch in the plant. In this way, more and better rice is produced, and less climate impact.”

Development of the new rice species has won many awards. An example is Sun's research being named as one of 2015’s foremost innovations by the magazine Popular Science. The research results have also been published in the prestigious magazine Nature, and publicised in The Economist, Financial Times and MIT Technology Review, just to mention a few examples.

An investment for better climate
SLU Holding has been a driving force in the creation of the company Green Rice Sweden AB, which was founded together with a Swedish/Chinese investor with a keen interest in the world's climate. The investor, Zheng Fang, is a philanthropist who invests in high tech projects with the potential to improve the world's climate. A couple of years ago, Mr. Fang’s attention was drawn to Sun's research, which led to the start of a fruitful relationship. In 2017, an agreement was signed between the Swedish University of Agricultural Sciences (SLU) and Mr. Fang's company Beijing Xianhe Transportation Technology, which today funds Sun's Research. Mr. Feng and Sun also have a joint company in Green Rice Sweden AB, where SLU Holding also has an ownership interest.

Sun's tips for other researchers
In response to the question of what Sun would like to offer in the way of tips to other researchers, the answer is to focus on the following three elements in their research:

• Improve in basic research – to understand the area, the fundamental challenges and the big questions
• Research for society and the environment – and don't be afraid to use new cutting-edge technology to solve societal challenges
• Try to commercialise – "All research should be linked to an application or products"
For those of you who are at the beginning of your research careers and are thinking about what you want to focus on, Sun gives the following advice:

– Let your interest determine the topic you focus on! In my case, I had a burning interest in carbon metabolism. Once you have your focus, try to find solutions to the world's major problems and environmental challenges. This gives you strength and focus. No one is in research for the money alone,” says Sun.

Want to help underdeveloped countries
Why development of rice became Sun's focus area is due to his ardent interest in the subject (carbon metabolism) and the government agency SIDA (the Swedish International Development Cooperation Agency). About 10 years ago, Sun came into contact with them and their work to help underdeveloped countries in solving challenges such as food shortages, for example. SIDA has supported Sun's research since this time.

- “I am also very grateful for my team, and support from SIDA, the TC4F programme, Vinnova, FORMAS, Lantmännen, SLU's Faculty of Natural Resources and Agricultural Sciences and the Department of Plant Biology, the Carl Trygger foundation, the BarleyFunFood programme, Mr. Zheng Fang’s company and SLU Grogrund,” says Sun. “Without them I could never have come this far.”